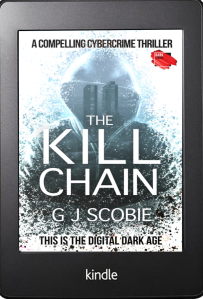 The Kill Chain. A cybercrime thriller.

It was a surreal moment signing a publishing contract in February 2022. Having written a fair number of novels over a decade and more, to be offered a deal took me by surprise. At the time of writing I’m still a bit shocked, but have been getting on with the work necessary to make this happen.

The timeline of my journey to publication is a little hazy, but looking at my notes, is roughly as follows. My first novel, A Distant Threat of Moonlight was submitted in 2011 and did receive a full manuscript request. It was turned down , but I received good feedback. I then proceeded to write another three novels over the next couple of years. By the end of 2013, I had four novels, the last three I didn’t bother to submit at all.

I started writing short stories and published some by the end of 2014. During this time I wrote a great deal of poetry, all of which remains unread, and moved towards science fiction fantasy as the way forward. During 2015 I came up with The Clockmaker Conspiracy Book 1, which I did submit over the next two years as it was rewritten several times and did receive several full manuscript requests. I even pitched it in person in London during 2016 on a meet the agent day, but again was turned down. By early 2018 I had written books 2, 3 and was working on book 4 of the series. None of these were submitted to agents or publishers. By this time I had written 8 novels, submitted 2 and had received full requests on both of them.

I then drafted The Copernicus Coercion Book 1, Code Critical, by the end of 2018 and this was submitted and did receive full manuscript requests, generating some positive feedback. Generally, I could write, it was a good story, but it wasn’t for them.

By late 2019 I had written The Cannongate Containment, which again I submitted, with the same results. Pitch was strong, good story, good writing, but not for us.

2020 was a strange one for everyone. I started work on my 11th novel, called The Kill Chain. This was a very difficult write, and ended up being rewritten from the third into the first POV. This was not a fun write and took longer than anything I had written to date. I sent it off to two publishers and again the same result. Full manuscript request, good feedback, but no thank you, not for us.

I also outlined book 5 of The Clockmaker Conspiracy. I think this is going to be the last, but I’ve ideas for other adventures for these characters after this series is concluded.

During 2021 I wrote my 12th novel, The Copernicus Coercion Book 2 which is called Minus Zero. This was followed by my first novella, called EVA, which was completed in March 2022. In February 2022, I self-published Book 1 of The Copernicus Coercion. Shortly before that I had submitted a couple of chapters of The Kill Chain to Darkstroke Publishing, who then requested the full manuscript. I was offered a three year deal on the back of it.

People often say don’t give up. Keep going, keep writing and stay focussed. It’s easy to say and harder to do. Hopefully, my experience will provide hope to those writers still going through the trials of submitting and then picking themselves up. Sitting back down at your desk after filing a rejection, is tough, but all writers have had rejections. It shows you are trying and every novel you write is a learning experience.

A positive from all this is the fact I’ve learnt to write and to keep on producing work despite the disappointments. When you get signed, the pressure is then on to deliver and return edits and take feedback and changes within tight timescales. While you are being rejected, you are preparing yourself for the day when someone takes you on towards your day of publication. You don’t want to be running on empty. You want to be prepared and confident you can write and continue to do so.

I’m now starting my 13th novel, The Kill Switch, a sequel to The Kill Chain. I have also outlined novels 14 and 15 as a couple of new ideas have come to me demanding I map them out in readiness for drafting towards the end of this year.

Finally, I am still working fulltime Monday to Friday in a demanding role. I’ve learnt to make time to write, regardless of how I’m feeling. For me, it’s all about turning up early each morning and getting something down. I don’t know who it was who said you can’t edit a blank page, but they were right. I wish you all the best and good luck!